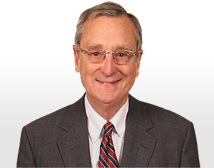 Justice Boehm was appointed by then Governor (now U.S. Senator)  Evan Bayh as the 104th Justice of  the Indiana Supreme Court on August 7, 1996. In addition to the customary duties of a Justice, he led the judiciary’s expansion of jury lists to include substantially greater cross section of the citizenry and the relocation of the facilities of the court’s several support and administrative agencies to their present quarters. He is the author of 477 majority opinions of the court and 78 separate concurring or dissenting opinions.

In addition to his legal experience, Justice Boehm has been active in a variety of civic and charitable organizations.  He served as Chairman and CEO of the organizing committee for the 1987 Pan American Games in Indianapolis, and was the first President and CEO of Indiana Sports Corporation, which staged the 1982 Olympic Festival and is widely regarded as a national leader among community sports development organizations.  He also served as President of the Penrod Society, which supports the arts in central Indiana, and was one of the principal organizers of the Economic Club of Indianapolis.  He is a Trustee Emeritus of Brown University, a director of Metropolitan Indianapolis Public Broadcasting, Inc. and Indianapolis Convention and Visitors Association, Inc.,  and a member of the Nominating and Governance Committee of the United States Olympic Committee.   He was Co-Chair of the Organizing Committee for the World Basketball Championships held in 2002 in Indianapolis and currently serves as Chair of the Cultural Development Commission established by the Indianapolis Capital Improvement Board.

Justice Boehm is married to Peggy Boehm, a CPA by training.  She has held a number of senior positions in Indiana state government, including State Budget Director, Chair of the State Tax Board, Executive Director of the White River State Park Commission, and Utility Regulatory Commissioner.  He has four daughters and six grandchildren.